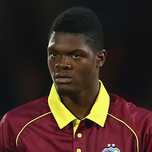 Like with most young promising cricketers, there were demands of drafting him early into the side. And those demands were met in 2016 when he was drafted into the Test squad against a visiting Indian side. A 19-year-old pacer announced his arrival to international cricket in style by dismissing Virat Kohli with a venomous delivery in just his third over. In the same year, Joseph made his ODI debut against another Asian side – Pakistan – in Sharjah.

Joseph sustained a stress fracture in his back in December 2017 during the tour of New Zealand and that forced the pacer to be out of international action for close to seven months. Post recovery, Joseph took part in the home series against Bangladesh and then represented St Kitts and Nevis Patriots in the Caribbean Premier League. Joseph was initially named in Windies’ squad for India tour, but was later replaced by Sherman Lewis as a Cricket West Indies (CWI) medical panel recommended that he should be allowed to continue his rehabilitation to full fitness for international competitions.

The Antiguan started his career with the club that his father was once a part of. Soon after he got into the age group cricket and tasted success playing for Antigua. Joseph, who idolizes Dale Steyn, learned the craft under former West Indies pacer Winston Benjamin. CWI awarded Joseph a central contract across all formats for the 2018-19 season in October 2018.

6 Ways to Stay Creative While Working from Home 0