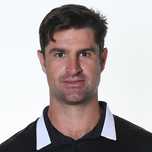 He was called up to the Blackcaps team for the home series against Zimbabwe and South Africa in 2012. Born in Zimbabwe, Grandhomme represented Zimbabwe in the Under-19 World Cup in 2004 before migrating to New Zealand in search of better opportunities. A national call up soon followed in 2012-13 for the shorter formats. His ball-striking skills and utility medium pace made him a good pick in limited-overs cricket.

However, ironically, it was in his Test debut that de Grandhomme managed to make a bigger statement. He ran riot in the home series against Pakistan in the summer of 2016 on seaming pitches where his medium pace was enough as long as accuracy was there. His 6-fer on debut were the best figures by a New Zealand debutant. Although not a regular in the Test side since then, de Grandhomme is often considered on pitches that have movement in them. The reason for this is his ability to move the ball, even if at a moderate pace – a skill that grows in strength considerably on greenish tracks. Apart from this, his counter-attacking batting skills are also an added advantage.

It’s still early days in de Grandhomme’s career but his ability to turn a match on its head makes him a very handy cricketer to have, particularly in white-ball cricket. If New Zealand decide to revamp their batting order in Tests, he could be a regular feature in the longest format as well. It can safely said that de Grandhomme is yet to translate his potential completely on the international stage although we have seen glimpses of his talent. New Zealand’s love affair with all-rounders is well known and the Kiwis will hope that de Grandhomme is able to cement his spot across formats in the years to come.

The 2016-17 season was a breakthrough year for de Grandhomme. Not only did he make his Test debut but was also called up by Kolkata Knight Riders as a replacement for Andre Russell. Though he played for most parts of the season, de Grandhomme got very limited opportunities with bat and ball. His standout performance was 3 for 4 on a seamer friendly wicket at Eden Gardens against Bangalore.

The 2018 season marked 10 years of IPL and all teams looked to build for the future and de Grandhomme was not in KKR’s plan. He was picked up by Bangalore for INR 2.2 crore from a base price of 75 lakh. The shift didn’t change his fortunes as he didn’t start the season and when he did, the chances were very little. However, with a strike rate of 166 in T20s, RCB did not want to let go of the burly all rounder.

Having featured in New Zealand’s playing XI regularly in recent times, Colin de Grandhomme is the first choice seam all-rounder for the Kiwis. de Grandhomme might start ahead of James Neesham in WC 19 and his ability to build pressure from one end with economical spells is one of the reasons that gives him an edge. Also, he can hit the long ball, hence you can expect him to chip in with his handy all-round contributions throughout the course of the tournament. If he maintains his discipline and gets wickets, the all-rounder might prove to be a pivotal member of the playing XI.

55 Inspiring Ideas For Your Next Passion Project 0

The Best Room Redesign Ideas for Your Home Renovation  0