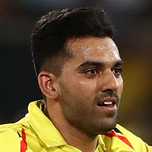 However, the wings to his career have never attained full flight as he has been plagued by persistent injuries. Add to that his woes with the old ball and thus India would feel robbed of someone who could have achieved so much more. In six years of first-class cricket he has accounted for 105 wickets in 35 games at a not-to-be-noted average of 35.17. Even in the IPL, he had been a notable absentee despite being a part of Rajasthan Royals. In 2016, he got picked by the temporary franchise Rising Pune Supergiants whom he represented for two seasons.

The 2016 and 2017 seasons in the IPL weren’t great for Chahar either although he did show flashes of his potential. At the domestic circuit, he was delivering the goods on a consistent basis but it requires performances in high profile tournaments like the IPL for the world to take notice. Plus the competition levels are much higher which definitely tests the cricketer in a big way. Chahar worked harder on his game and his stupendous success in the 2018 Syed Mushtaq Ali trophy (the main T20 domestic tournament in India) made him stake a claim at the IPL auctions where he got snapped up by the Chennai Super Kings.

Although not an extremely fast bowler, Chahar can clock fairly impressive speeds, mostly between 135-140 kph and has the repertoire to be a good white-ball bowler. Apart from his pace bowling, he can also wield the long handle to produce cameos if required. All this makes him a good package and he was keen to have a breakthrough season sooner than later as he aims to make it into the national team. That came in the 2018 and 2019 seasons where he became Chennai’s pace spearhead, bowling lovely new-ball spells and gradually honing his old-ball skills too.

Not surprisingly, a call-up to the national side was round the corner for Chahar and to fast-track the proceedings, the selectors included him in the India A squad for the Tri-series involving Windies A and England Lions. The pacer carried his IPL form and picked up 10 wickets, thereby emerging as the leading wicket-taker for India A. Jasprit Bumrah’s injury meant that Chahar was elevated to the Indian T20I side and he eventually made his debut in the 3rd game of the series. Chahar had a not-so-memorable outing with figures – 1 for 44 in his 4 overs. If he can stay fit, there is no doubt that Chahar will be one of India’s bowling mainstays in white-ball cricket in the years to come.

Our Best Reads of the Week 0

Mi Band 6 Vs OnePlus Band: Which One’s Better And Why? 0