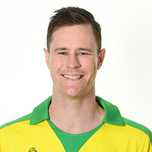 Behrendorff came into his own in the 2013-14 season of the Sheffield Shield where he finished as the second highest wicket taker with 40 scalps at a miserly average of 22.70. He continued his good form into the BBL as well and played a key role in his team’s title triumph. He followed it up in the next season by picking 15 wickets in ten matches at an average of 16.73, driving his team to its second consecutive title. His performances saw him being voted as the ‘Domestic Player of the Year’ for the 2014-15 season.

Behrendorff continued to peg away in the domestic circuit with impressive performances and also shone for the Australia A side. With a formidable bunch of pacers playing in the national side, it was difficult for him to break into the squad although he had been touted to be a future superstar by everyone who had watched him bowl. It took a while before he was finally handed his international debut for Australia and it came on the tour to India in 2017 during the T20I series. He made an emphatic statement straightaway, snaring a 4-fer that removed the cream of the Indian top order to set up a convincing Australian victory.

Blessed with a tall frame, Behrendorff has the ability to extract bounce from any surface due to his height and also has the ability to swing the ball appreciably both ways. Add to this the variety of a left-armer and you know why he is a special talent. He is considered an all-format bowler due to the depth of his bowling repertoire. With Australia having a potent pace trio of Starc-Hazlewood-Cummins, it is a known fact that someone like Behrendorff will have to wait for his opportunities and also grab them whenever they do present themselves.

And that happened during the 2018-19 season with Starc and Hazlewood injured for a lengthy period. Behrendorff got a decent run in the white-ball squads and was a surprise pick for the 2019 World Cup, as he wasn’t expected to be in the 15. However, the decision to leave out Hazlewood saw the young turk get his maiden World Cup call up.

Tall and strong, a left-arm hit-the-deck bowler – Mumbai Indians have seen the success that Mitchell McClenaghan has brought them. And Jason Behrendorff isn’t far off from that blueprint. An Australian quick who has shown some promise in the early days of his international career, and who has a strong record in the domestic T20 competition back home, Behrendorff was handed his maiden IPL contract by MI in 2018, although he’s yet to make an appearance in the blue and gold.

World Cup through the years
The 2019 edition will be Behrendorff’s first ICC tournament but it’s unlikely that will start straightaway, given the competition for spots in the pace department. He will be vying for a slot with Nathan Coulter-Nile and the latter’s experience as well as multiple abilities should give him the edge. However, Behrendorff is a quality bowler himself, more so with the new ball and on surfaces where is more movement on offer, he could be the ideal pick to partner the likes of Mitchell Starc and Pat Cummins. The young pacer will definitely have a learning experience either ways and it surely the future of Australia’s pace bowling.

Improving your Mental State, Fitness and Diet is Key in Poker 0