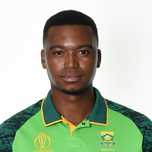 Ngidi made his Test debut against India at Centurion in January 2018, coming in for Dale Steyn, who had injured his heel in the first Test at Newlands, Cape Town. He finished with the perfect script, nabbing a six-fer on debut and impressing everyone with his pace, hostility and attitude. He famously set up a rampant Virat Kohli in his debut Test, bowling three balls outside off before angling one on the pads and trapping India’s captain plumb in front, thereby helping South Africa win the Test and take an unassailable 2-0 lead in the three-match series.

Ngidi made his Twenty20 International debut against Sri Lanka at Centurion in January 2017 and was named Player of the Match for his bowling figures of 2-0-12-2. He was named a part of the One-Day International squad that faced Sri Lanka later that month too, but was later ruled out of the series due to left abdominal muscle strain.

Hung over from the success in the Test series against India, Ngidi made his ODI debut against the same opposition at Newlands but came up short, with bowling figures of 0/47 in India’s convincing 124-run win. Ngidi continues to be an important part of South Africa’s limited-overs blueprint, although his fitness does remain a worry.

Ngidi and Kagiso Rabada form the crux of the South African pace attack. The fortunes of their country’s journey rely on their young shoulders. Ngidi has been in and out of the side this year due to injuries. He also missed the 2019 Indian Premier League with a side strain. Injuries has been part and parcel of Ngidi’s career and his hamstring flare-up resulted in the speedster missing a few matches in the showpiece 2019 World Cup – a tournament to forget for himself and his team. He featured in only one season for CSK in the IPL, but made an instant impact as the Men in Yellow clinched the title that year (2018). When fit, he is an automatic selection as one of the pacers and will add much-needed firepower to the side. He will have to compete with Australia’s Josh Hazlewood for a spot.

The 6 Funniest Memes of All Time 0