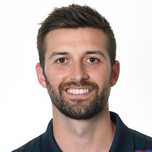 Wood started his career with Northumberland and played for them between 2008 to 2010. He then joined Durham in 2011 and in his first season itself, he took 19 wickets at 21.63 including a 5-fer that won his side the game against Nottinghamshire. Paul Collingwood’s decision to promote young talent helped Wood as he was pivotal when Durham won the county championship in 2013. The fast bowler ended the season with 27 scalps at 24.07.
Wood’s consistent performances earned him a place in the England Test side during the 2015 series against New Zealand. In his first four games, Wood claimed 14 wickets and his work rate was horsemen like, but still he was overlooked for the third Ashes Test, Steven Finn replaced him. However, due to his raw pace and accuracy, Wood continued to be in the selectors’ radar.

Despite injuries plaguing him at regular intervals, Wood has been a key component of England’s limited-overs attack. His ability to unsettle the batsmen with pace makes him the X-Factor of the attack. He also played a couple of Tests during the 2017 summer at home against South Africa but was barely impressive. Wood got hit by injuries again and that forced him to miss the Ashes campaign in Australia. During the embarrassing drubbing suffered, England dearly missed a bowler who could clock high speeds like Wood. Ironically, he was there in Australia at that point, playing for the England Lions in the shorter formats.

However, the think tank weren’t convinced of his ability to get through a five-day game just yet and that meant that he wasn’t picked. If he can stay fit regularly, there is no denying the fact that Wood could become one of England’s most potent pacers in the years to come. His numbers in international cricket thus far are anything but impressive. However, it is only a matter of time before he gets those right. An injury-free Wood adds so much value to the England unit. In 2018, he selected by the Chennai outfit in the Indian Premier League, but he returned home after playing just one game in a bid to keep his place in the Test side.

World Cup – What to expect

After being largely overlooked in the latter portion of 2018 in the ODIs, Wood made a big statement in the longest format against West Indies. When England had already lost the series and were trailing 0-2, Wood produced a Man-of-the-Match award winning performance by claiming 5/41 in 50 balls – his maiden Test fifer – at St. Lucia. This performance helped him regain his mojo back and the pacer followed it up with a good show in the 50-over format against the same opponents.

Wood had only one ODI to prove his worth before the mega event when England locked horns against Pakistan. In one of the best batting-tracks at Nottingham, the right-handed pacer’s bowling figures of 2/71 was good enough for him to seal a spot in the 2019 World Cup.

England’s team-management have a good headache in the mega event – ‘problem of plenty’. Wood and Jofra Archer would certainly be one helluva new-ball bowling pair – courtesy their deceptive pace. England arguably have the strongest/longest batting line-up in the tournament and Wood – who has a Test half-century – will bat at eleven if he makes it to the playing XI.

Desk setup’s that maximize your work from home productivity! 0