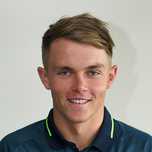 A diminutive, mild-looking left-arm seamer whose natural angle helps him swing the Dukes away from right-handers, he doubles up as an able batsman lower down the order; and given the ease he looks in with the bat, it could soon become his primary skill.

While his brother, Tom Curran, rose up to become primarily a limited-overs bowler, Sam went the more conventional route. Hailed as a prodigy in his younger days, he progressed rapidly into Zimbabwe’s under-13 ranks before relocation, and then through Surrey’s age-division cricket and became the second youngest player to make his FC debut for Surrey at 17 years and 40 days, impressing immediately with a five-wicket haul on debut against Kent.

He was soon picked for the 2016 under-19 World Cup, followed by a spot in the England Lions’ tour to the UAE later in the year. An injury to Ben Stokes meant that Sam was fast-tracked into national reckoning, getting his maiden Test cap at Headingly against Pakistan in June 2018.

His biggest moment under the sun came in the home summer of 2018 against the then number one side in the world, India. Picked primarily as a bowler, it was his abilities with the bat from number seven that helped rescue England after middle-order collapses, match after match. It was no surprise when he was named the Man of the Series for his all-round contributions (272 runs and 11 wickets) that saw England win 4-1. He carried on his form into the Sri Lankan tour, playing a key role in England whitewashing the islanders.

And performances against India never go unrecognised monetarily. Despite being a relatively unknown quantity for his T20 exploits, Sam Curran’s name at the IPL auction later in the year attracted a bidding war. In the end, he was sold for a colossal 7.2 crores INR to KXIP to become one of the biggest surprises at the auctions over the last twelve seasons. He endured a strictly average time in the IPL, with the lack of swing on Indian pitches making him cannon fodder at his pace which generally is the late 120s or early 130s. That said, he did have a game where he produced a hat-trick and has shown promise to be of use, except that it could be as a batting all-rounder. Sam is a clean striker of the ball and in T20, it’s this attribute of his that will hold him in better stead while his bowling could be more of a bonus. CSK picked him at the 2020 IPL auctions and although he doesn’t seem like a sure starter at this point. Sam is definitely a handy addition to the squad.