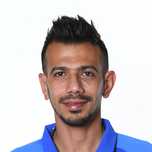 However, the Mumbai franchise did not give him many matches and he went into the auction pool for the 2014 edition of the IPL. It indeed was a blessing in disguise for the leggie as he was picked up the Royal Challengers Bangalore (RCB), for whom he played an integral part in their bowling set up.

For the first time in his IPL career, Chahal played all the matches in a season and was one of Virat Kohli’s go-to man in crunch situations. He started off the season very well in the UAE, but once the tournament returned to India, he couldn’t get many wickets. However, he was economical throughout the season. He was also a contender for the Emerging Player of the Year award but he lost out to Axar Patel in the end.

Chahal has since then grown onto become the linchpin of Royal Challengers Bangalore’s spin attack. While he doesn’t have a deceptive googly, he more than makes up for it with his skiddy bowling action and accurate line and length. One of the few bowlers who doesn’t mind to lure the batsmen with the flight, several of his wickets have come with the batsmen attempting to clear the fence.

His success in the shorter format of the game and Virat Kohli’s first hand knowledge resulted in his inclusion in the Indian team – first for the Twenty20 format of the game and then the 50-over game. The tour to Zimbabwe in mid-2016 was the ideal opportunity to infuse fresh blood and Chahal took his chances with both hands, impressing in both forms of the game.

Having shone in his first chance, Chahal took his game a step further when England came visiting during the winter of 2016-17. His figures of six for 25 in the Twenty20 international are the second best ever figures for a bowler in a T20I match. Aptly, it came at his second home, M Chinnaswamy stadium. A solid series against Sri Lanka followed and Chahal has put himself in the queue if the selectors deem that a wrist spinner would be ideal in the scheme of things as India prepare for the 2019 Cricket World Cup.

He started his spell with RCB by playing all 14 league games. Though he finished with only 12 wickets, Chahal was nominated for the Emerging Player of the Year, which he lost to Axar Patel. The following two season saw Chahal grow as a player – picking up 44 wickets and becoming one of RCB’s vital cogs. In the 2018 edition, he went past Vinay Kumar to become the leading wicket-taker for the Bangalore franchise.

Though RCB retained only Kohli and AB de Villiers before the 2018 auction, Chahal was bought back by the Bangalore team via the RTM (right to match) for INR 6 crore.