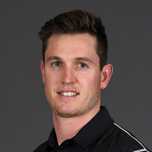 On the back of his Champions League performances, he was selected to play for the Kiwis against Pakistan in December 2010 and has so far played only a couple of T20Is. He was also named in the 30-man initial probables list for the 2011 World Cup, but didn’t make the final cut.

Milne was frequently hit with injuries during 2011-12, which interrupted his First-Class career to a great deal. However, he hit the headlines again when he was included in New Zealand’s squad for the 2012 T20 World Cup in Sri Lanka.

Milne, made his ODI debut against Sri Lanka in 2012. After being out of the international circuit for over a year, Milne then, received a surprise recall to the ODI side for the series against Sri Lanka in November 2013. He featured in two ODIs, but his performances were nothing to note about. He played an ODI each against West Indies and India at home, before playing four matches of the ODI series against Pakistan in the UAE in December 2014, where he grabbed eyeballs with his ability to consistently bowl at 145-150kph. Impressed by his show, the selectors named him in the squad for the 2015 World Cup.

Although age is on Milne’s side, he will have to constantly adapt his style to the changing pitch and conditions, if he needs to survive at the highest level. He needs to work towards maintaining high fitness levels, if he has to retain his place in the national side.

Five years after making his debut, Milne has played only a handful of ODIs and T20Is because of constant injury. The fast bowler suffered a year of hamstring, side and elbow injuries before returning to franchise cricket with Royal Challengers Bangalore in 2017. After having a decent season in the IPL, Milne was named in the Champions Trophy squad.

Use selections to make a composite on your iPad 0