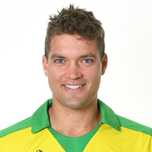 In his initial cricketing days, Carey was a specialist batsman by design in grade cricket but had a dismal start to his dreams in the new sport. That didn’t prevent him from getting a rookie contract for the 2013-14 season with South Australia. It was then that he realized the need for having multiple skills. Carey started to shoulder wicket-keeping duties and slowly got a hang of being a gloveman. This also opened up more opportunities for him to feature in the playing XI. He started batting in the lower middle order.

The 2015-16 season was a stellar one for Carey in Grade cricket and such was his impact that he got a call up for the Sheffield Shield later that season for the final rounds. He managed to catch the eye of the selectors and earned his first senior contract for South Australia for the 2016-17 season. That proved to be turning point for Carey as he became only the fourth gloveman ever to amass over 500 runs and affect 50 dismissals in a single Sheffield Shield Season.

Australia’s recurring problems with the wicket-keeper batsman slot has meant that Carey has been in the selectors’ radar since his redemption as a cricketer. With Matthew Wade losing his form, it did seem like Carey would be a darkhorse for the 2017-18 Ashes squad. However, it was Tim Paine who got the nod in a stunning selection that nevertheless paid dividends for Australia in the series. Carey hasn’t let any of this affect him and continues to make runs in Sheffield Shield apart from being a terrific wicket-keeper.

The hard work paid off for him when he got picked up as Australia’s limited-overs wicket-keeper in the latter half of 2018 and although no.7 is a bit too low for him, he has adjusted reasonably well, thereby gaining his maiden World Cup call.

World Cup through the years

Carey is readying himself to play in his first World Cup in the 2019 edition. Not someone who can blast the ball from word go, his batting skills revolve around manipulating the ball into gaps and deft touches. It’s not as if he can’t hit sixes but just that he would need some time before unleashing. Batting at no.7 won’t give him that freedom and although he has done decently in recent times, Carey knows that his hitting will have be at its best in the World Cup as he would be mostly batting at the death. His glovework has been very good always and he would want to get it up a few more notches.