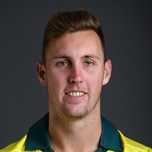 Stanlake’s efforts saw him making his First-class and List A debut in the 2015-16 season. His ability to bowl really quick from his really tall build made everyone who saw gasp at what he could achieve potentially. It didn’t take long for him to feature in the BBL and made his debut in the same season. Stanlake managed to hurry quite a few batsmen with pace and also caused problems with the extra bounce that he was able to generate.

Australia’s fetish for outright quick bowlers meant that it was only a matter of time before Stanlake got a national call up. He was picked for the ODI series at home against Pakistan in early 2017 and even featured in a T20I against Sri Lanka but fitness issues were evident in the fast bowler. Still very much a raw talent, Stanlake has a bit of polishing to do before he becomes a complete fast bowler. More importantly, he needs to stay injury-free.

A quick glance at Stanlake’s total number of IPL runs thus far (till March 2019) shall reveal that he’s scored a total of five runs with his highest score reading 5*. On 12 April 2018, with one needed from the final ball against Mumbai Indians in Hyderabad, Stanlake swatted his countryman Ben Cutting over mid-wicket and scored, perhaps, the most valuable five runs of his career.

The BIG BILLY as they call him in Australia keeps his bowling approach very simple and straight: to bowl fast and to exploit extra bounce. His nagging channels and rapid pace in the Big Bash drew a lot of attention and none prominent than the Royal Challengers Bangalore who signed him for 30 lakhs INR ahead of the 2017 IPL season. Stanlake featured in only two games in his debut season, and was subsequently bought by Sunrisers Hyderabad in 2018 Just as he started to improve his IPL credentials, a fractured finger injury ruled him out for major part of that season and could be back on fold for a pivotal role in 2019.

‘The coat was made with latex offcuts’: the student designers making do in lockdown 0

A lot of people know that regular roof maintenance is a good idea, but they are not all sure why. It turns out that there are actually several great r [...]
Read More

v/s Research suggests that bikes and other two-wheelers are most commonly involved in road-side accidents. The statistics had increased manifold unt [...]
Read More
© 2021 24Inside.com. All rights reserved. Designed by 24Inside.com