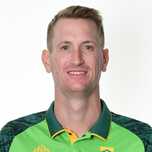 Morris took up cricket very late, making his First Class debut for North West at the age of 22 in 2009. By 2011/12, he already established himself as their leading bowler. During that season, he was the highest wicket-taker in the domestic T20 competition with 21 wickets. With the help of this performance, he made it to the T20I squad which was touring Zimbabwe. Though he didn’t play a single game on that tour, he gained useful knowledge from Allan Donald.

That experience helped him perform brilliantly in the 2012 Champions League, where his franchise – Lions – reached the final. The impression he had on the tournament earned him a call-up for the T20I series against New Zealand in December 2012. A few months later he was selected in the Champions Trophy squad and made his ODI debut against Pakistan at Birmingham.

During the 2013 IPL auctions, Morris was bought by Chennai Super Kings for US$650,000. He commented that he had \”never seen so much money\”. Morris went on to play a vital role in getting Chennai to the final of the IPL where they lost to Mumbai Indians.

The IPL continued to remain kind to him, and in 2016, he was signed up for a whopping US$1 million by Delhi Daredevils. On Morris’s part, he did justice to that price tag, finishing as their leading wicket-taker that season. Prior to this tournament, Morris had made his Test debut for South Africa in the New Year’s Test against England. In the following one-day series, with South Africa 1-2 down and on the brink of losing the fourth ODI as well, Morris turned the match around from out of nowhere and stunned England with his power-hitting. The hosts eventually went on to win that series.

Morris went on to play in the World T20 a month later, beating fellow all-rounder Wayne Parnell for the spot in the team. However, the tournament didn’t go to plan for him and apart from a four-fer against Afghanistan, the all-rounder didn’t produce anything of note. From mid-2016 though, Morris has received a much more consistent run in the ODI format which has benefited him.

Morris missed out of the 2015 World Cup and he was also not picked for the upcoming 2019 mega event. He was only brought in because an injury to Anrich Nortje ruled him out of the tournament. You could see the disappointment when the preliminary squad was announced as Morris was playing an IPL game for Delhi Capitals and when he got out he took an eternity to walk back to the dugout. He was a frustrated man but things have changed since and he finds himself among the 15 members. Though he might be a doubtful starter, Morris will look to make the most of this new lease of life.

Leadership Quotes That Will Make You Feel Unstoppable

Leadership Quotes That Will Make You Feel Unstoppable 0

Your first job is going to be hard for a lot of reasons. You’ve probably just spent the last few years taking it relatively easy in college and now th [...]
Read More

Leadership Quotes That Will Make You Feel Unstoppable

It takes half your life before you discover life is a do it yourself project. (napoleon hill quotes) Strength and growth come only through [...]
Read More
© 2021 24Inside.com. All rights reserved. Designed by 24Inside.com