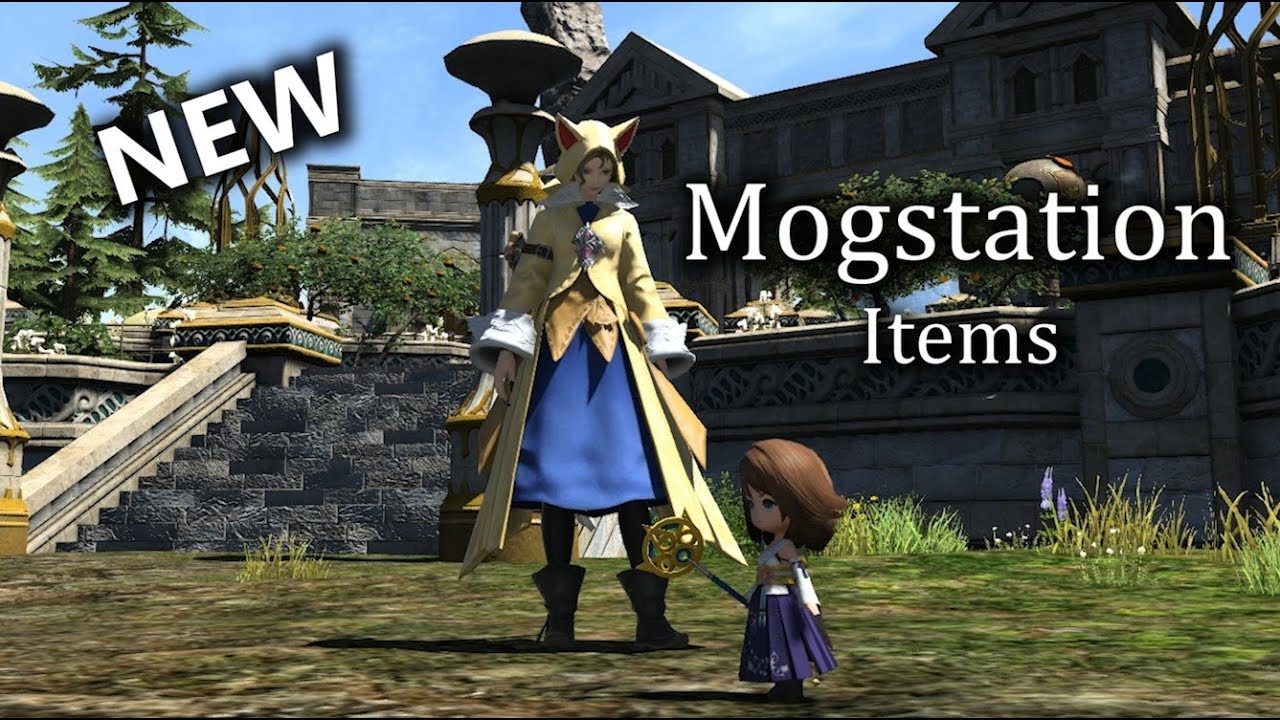 A discussion about Mog Station items and prices

It wasn’t too long ago that the now-infamous Chocobo Carriage was released on the mogstation for the price of two month’s sub time. With the last update, they added Alphinaud/Alisaie’s original ARR outfit for a whopping $18. It made me curious enough to do a price comparison for the different costume sets, and it actually bothered me how much they’ve arbitrarily cranked up the prices on some of these things over time, and the price on the Sharlayan suit actually makes some of their other price points super dubious. I’ll go over most of the different categories of mogstation items here. All prices listed will be in USD since that’s my only visible option.

This is probably the most egregious category. A lot of these costumes are often undyable and gender locked, but most of them are at least separated into individual pieces that make up the set. The original ARR Scion sets started at $8 (except for Minfillia, who cost $15 because it included her hairstyle), went up to $12-$15 for everything after (with only Aymeric and HW Thancred adding their hairstyles), and are now at $18 for a “set” that is an undyeable one piece that covers the arm, leg and feet slots. I don’t think being non-gender locked warrants such a huge price for literally one item.

These sets have consistently been $18 since the first sets, the Far Eastern garbs, were added in September 2016. I’ve seen a lot of defenses and justifications for why these sets were more expensive than all the others, most revolving around licensing the sets from the Korean publisher so they can be released on international servers. I used to buy into that logic but again, with the release of the Sharlayan suit matching the same price as these sets, I’m starting to think the higher price point was arbitrarily assigned in the first place.

The most expensive bracket in the shop. What started with just Sleipnir as the one premium Mog Station exclusive has since expanded by a lot, with some of the mounts feeling like they should/could have been in-game rewards instead. The four-seater mount in particular pushed the price ceiling of “most expensive item in the shop” up, so I’m afraid we’ll see more new items enter that $30-$35 tier.

Emotes are the entry I’m actually personally bitter about. Before Eastern Dance, Play Dead and Backflip were added to the Mog Station in 3.4 and 3.5, most of the emotes in the game were either added directly to the emote list or distributed in-game through a short mini-quest/seasonal quest that gave a little context for how/why you learned that action. Only two dances were rewards for an in-game grind (MGP).

The pendulum has swung completely the other way since then, with most new emotes being either Mog Station exclusive or rewards for grinding out a new game mode, and a minority being in-game unlockables (usually just MSQ and Beastmen). Only Make it Rain events get new emotes, with the last other one being from summer 2018.

This one isn’t actually too bad. The vast majority of the minions released are done so in-game, and they haven’t added a Mog Station exclusive minion since 2016 (8 total). Most of these are just old event minions, which does bring me to…

This one tends to be controversial for some. I used to personally think that giving the chance for new players to buy older event items was fair back when the mogstation was first released (though still observed that they ended the practice of giving away last year’s items during the current year event), but have changed my stance as time has gone on due to both the sheer volume of the in question as well as the way they choose to sell them. There’s no justifiable reason for them to sell all the individual color items from different events for $5 each. Or the 4-5 variations of heavensturn hats for $3 each.

Cheaper than other categories, but just as bad to me as the cosplay sets. Due to nature of Housing items, a lot of these have the potential to be permanently lost through no fault of your own, specially if its one of the “food” type items. This is another category that’s mostly just full of past event rewards, so I’m also not in favor of it due to sheer number of equally priced items.

Another controversial one. These items were a necessity born out of FFXIV’s MSQ heavy structure, which requires you to clear the entire main story just to access relevant endgame content, but I can’t help but feel that charging individually for both MSQ skips and boosting your level is them having their cake and eating it. You could technically only boost your level and do the MSQ that way, but most people might find that boring given how much of a faceroll the content becomes. Inversely, skipping the MSQ without a level boost is entirely useless, as you need a level 50/60/70 character to start the game from the skipped point.

This and the Minions are probably the only two categories where I feel the price matches what is being offered. I’ve absolutely bought some of these for a buck when I’ve either run out of the in-game alternative or its too expensive on the market board. I only wish there were more options to buy X amount of dyes between 1 and 10.

The permanent #1 best seller. Not much to say here except I’m sure some people at SE’s yearly salaries are funded with the sales of these things alone. I know a person who chugs through these like they’re water. Don’t be like them.

What do you think about the prices of items sold on the Online Store, past and present? How do you feel about event items sold on the shop? Do you think we’ll see more price hikes on items as we go along? I’d love to hear from people who regularly buy things from the store, as well as people who used to buy a lot but have curbed the habit.

A soft touch for robotic hardware 0

I went to a fight the other night, and a hockey game broke out. (rodney dangerfield quotes) When I was a kid my parents moved a lot, but I [...]
Read More

Dandruff is a problem that you cannot get rid of overnight. Dandruff is not a disease but a condition. Everybody faces the issue of dandruff in their [...]
Read More