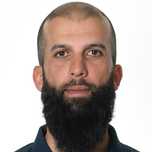 He was a child prodigy and at the tender age of 15 rivalled many established cricketers. He was awarded the captaincy of England’s Under-19 squad for the 2006 World Cup and took the team to the semi-finals, a particularly impressive performance coming from a 11-0 drubbing received in Bangladesh, earlier that year. Moeen, continued to be a consistent performer for Worcestershire and was the acting captain at the start of the 2011 season as the usual club captain, Daryl Mitchell was injured.

Moeen had the most prolific championship season in 2013, scoring a whopping 1,375 runs in 17 First-Class games, which included four tons and eight fifties. His bowling was equally outstanding as he gathered 31 wickets. This strong display earned him the Professional Cricketers Association’s player of the year award, a place in the England Performance Programme tour to Australia and was also picked in England Lions’ trip to Sri Lanka. He then, made his ODI debut against West Indies in February 2014 and registered his maiden fifty in the third ODI. He also played the 2014 World T20 in Bangladesh.

It was Moeen’s off-breaks that earned him a call to the England Test side. After the retirement of Graeme Swann, England were searching for a spinner to take up the vacant role and they saw Moeen fit for the job. He made his debut against Sri Lanka at Lord’s and made 48 in his very first innings. During the second Test, Moeen showed his pedigree with the bat by scoring a patient 108 not out and almost saved the game for England, but failed to do so as the last man James Anderson fell to the penultimate ball of the game.

During the home series against India, Moeen bamboozled the opposition batsmen with his off-breaks. The visitors didn’t respect the off-spinner and kept giving him wickets. By the end of the series, Moeen had picked up 19 wickets and was the second highest wicket-taker for England. However, he could not contribute much with the bat as he failed to score a single fifty.
Coming back to the ODIs, after Hales failed to impress, Moeen was given the opportunity to open the innings in Sri Lanka. The Worcestershire man didn’t disappoint, as Moeen scored his maiden ODI ton at Colombo (RPS). Since that knock, he has made the opening slot his own. Having been picked for the 2015 World Cup, Moeen will be someone to watch out for, with both bat and ball.

Moeen belongs to a strong cricketing pedigree, with his brother Kadeer and cousin Kabir, both playing in the county circuit.
Once termed as a elephant in the dressing room, Moeen Ali grew leaps and bounds post the 2015 World Cup and established a crucial spinner-cum-all-rounder slot in the Test side. During Test series in India, Moeen struggled to match the quality of Ashwin and Jadeja, but made useful contributions with the bat. His breakthrough point in Test career came against South Africa at home, where he bagged 25 wickets whilst piling up 261 runs in 4 Tests for which he was accorded with the Player of the Series award.

Despite all his contributions, there have been question marks over Moeen’s ability to perform away from home. The last tours of Bangladesh and India reflected this as he was unable to shine despite finding conditions suitable to spin bowling. The most recent one was the Ashes debacle where he was comprehensively outbowled by his Australian counterpart Nathan Lyon. Apart from his bowling, Moeen’s batting has also dipped outside home and this will be a major concern for England whose away record has been shambolic over the last few years.

In the shorter forms, Moeen has more or less been a handy player always, irrespective of the conditions. He along with Stokes have given the team excellent balance as well as batting depth. However, there is no doubt that Moeen’s Test future is under the scanner. His poor form of late may force England to look for alternatives sooner than later unless he turns things around quickly.

IPL through the years
The post 2015 World Cup England side has seen him explosive players and Moeen Ali is one among them. With ECB allowing their players to participate in the IPL, it was no surprise that Ali was one of the nine English players to be picked. Royal Challengers bought him for INR 1.7 crore.

He did not start immediately as the team preferred seam bowling all rounders like Woakes and de Grandhomme. But Ali did get a chance and in his fourth game, played a match winning knock of 64 and was involved in a 107-run stand with AB de Villiers where he outscored the South African. That small glimpse was enough to convince the RCB management to retain him for the next season. In the 2019 edition, Moeen struck two fifties and a couple of cameos for his franchise. However, in certain games Moeen was under-used by his team. With the ball, his economy rate was under 7. The Englishman left his team before the conclusion of the tournament to prepare for the World Cup.

World Cup – Through the years and What to expect
Moeen Ali opened the innings for England alongside Ian Bell during the 2015 World Cup. Barring his century (128 off 107) against Scotland, Moeen didn’t make any substantial contribution and the conditions Down Under limited his role as a bowler – despite he being the main spinner. A side strain ruled him out of England’s final match of the competition.

Come 2019 World Cup and Moeen Ali is a sure-starter in England’s playing XI. Batting in the lower middle-order, the southpaw’s role is to provide those cameos towards the end of the innings and help his end up with an above-par score. Since the last WC, Moeen has scored two half-tons and a brilliant century (102 off 57 balls) against West Indies at Bristol in September 2017. The offie along with Adil Rashid have forged a great alliance – the ‘spin-twins’. Despite limited variations, Moeen’s economy in the 50-over format is under 5.5, which is acceptable in this era of cricket.