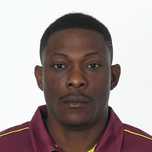 In the inaugural Caribbean Premier League, Cottrell emerged as one of the most promising young talents. His exploits in the CPL earned him a spot in the West Indies A squad that toured India in November 2013 but he had to pull out of the tour due to injury. He, though, impressed during the tour match on Windies’ tour of India a month later, picking up three wickets and subsequently earning his Test cap against India at the Eden Gardens, Kolkata. Cottrell, however, did not make the most of the opportunity and was later dropped for the second Test.

His T20I debut, though, turned out to be much better, wherein he pocketed 2 for 37 against England in Barbados in March 2014. Cottrell continued to be in the West Indies T20 squad and got a chance to play his second Test against South Africa due to Kemar Roach’s injury. However, he didn’t do much as he ended up with 1 for 124 and was overlooked for the next game. Cottrell was persisted in the T20Is that followed and he was good in patches. The speed and the slingy action prompted the selectors to give him another chance as they picked him for the World Cup in Australia.

Cottrell didn’t play ODIs for good two years after that, and was only recently recalled into the side for 2017-18 Windies’ tour of New Zealand.